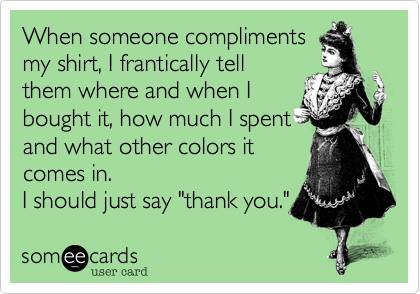 When someone compliments you, how do you respond? Do you deflect it (“You wouldn’t believe what I paid for it.”) or devalue it (“Oh, you’re kidding. My hair’s  such a mess!”)?

We (and I’m talking mostly women) aren’t really good with accepting a compliment. Why is that?  Do we think the person offering the compliment will think us conceited if we just accept it? We’re an “advanced” society (yes, I used the parentheses on purpose. Read the news), so it’s not as if we think we’re avoiding the evil eye by deflecting away the good wishes. Are we afraid that the compliment is being used as a wedge to manipulate us? (In some cases, there is an emphatic YES attached to it, but people are usually pretty good at spotting the Iagos among us. Sometimes, you learn that one the hard way. What’s that? Iago? It’s a reference to Shakespeare’s “Othello.” Iago is the bitter, faithless “friend” who manipulates Othello into jealousy and murder. Multiple murders. Iago is a POS)

Revolution From Within – Gloria Steinem

I read Gloria Steinem’s Revolution From Within years ago. It’s a collection of essays about self-esteem (mostly directed at women). She addressed this issue of women having difficulty accepting compliments and how it ties in to self-esteem.

I’ll do that “cost/color” description of something if I got it through a major shopping SCORE (That is finding an extraordinary bargain, like a designer blouse that actually fits and finding it for next to nothing. Since the demise of the REAL Filene’s Basement in downtown Boston, SCORES are harder and harder to find unless you have a thrift store attached to a favorite charity of the local moneyed set). Hey, if I paid $5 for something that would normally cost $99, you can bet your sweet bippy I’ll talk about it (This behavior is the modern form of hunting/gathering known to our cave ancestors. Back then, the men would grunt and gesture over the mammoth that got away. Today, women describe getting a genuine Chanel bag from the consignment store for 10 bucks. We just don’t mount it on the wall).

If you watch teen-aged girls in a mall, you will see the groups of girls talking and laughing together (and sometimes being catty little bitches to total strangers, also indicative of self-esteem issues. Projection). You will also observe the defensive girls: ones drowning in over-sized sweatshirts (hoodies, preferable because more can be covered up) with either the sleeves pulled down and clutched in balled fists or with arms tightly hugging the body. This is defensive body language. Eyes are usually downcast and if she does look up and make contact, it’s either a fleeting glance as the focus returns to the floor or a “What are you lookin’ at?” attitude.

Since I read Ms. Steinem’s book,  I have made a practice of walking with my head up and making casual eye contact with people as I go (smile, nod, “Excuse me” as warranted). It doesn’t change my life, but I hear back that people regard me as being self-confident. And when someone compliments me, I say things like “Thank you” or “That’s so kind of you. Thank you!” and leave it at that. So far as I know, nobody has taken these responses as conceited or egotistical.

It’s okay for us to select and wear cool shoes or a great haircut or look good. There’s nothing wrong with singing well or saying something intelligent or writing something that people like (Okay, yeah, that’s my thing).