Within the space of two weeks, women, average women (average looking) have been given two news items to think about in the mixed message department of sexual politics.

Timewise, we first have the “Louie” episode, “So Did the Fat Lady.” The gist of it is that Louie is pining after the attractive waitresses at his nightclub and ignoring the energetic, smart fat girl. Here’s the clip (warning: raw language) 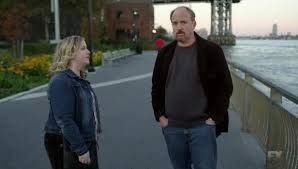 “So Did the Fat Lady” clip

This is nothing new. George Costanza on “Seinfeld” was a short, pudgy, balding, largely underemployed whiny schmendrick who didn’t see why he couldn’t date models.  And that episode wasn’t the first time this dynamic was explored on a TV show. I auditioned for a “George Lopez” where his ugly little friend made a blind date and she rejected him in the bar even after he makes a “why not me” speech. I was given the audition because I had (and have) a big, unattractive body (eyes to die for and that limits me in roles because I’m not ugly enough. I’m stuck with writing) and it would be really funny for an unattractive woman to dump the unattractive guy, even though he tells her the choice is either him or nothing. Who could resist?

This is me. I was never one of the attractive, desirable girls. I look at pictures and think I looked okay (my weight was a lot lower in my 20s. Been a big issue – see what I did there? – ever since. Even when I took off 75 lbs. 3 years ago, no one showed interest). I’m 53. I can count on both hands the number of dates I’ve had and still have unused fingers.  Plenty of male friends, but… I remember some friends in my law school class approaching one of my male classmates on my behalf. Understand, this gentleman was over 250 lbs. himself. His response? “One of us in this relationship needs to be thin.”

I’m smart, funny, I can cook, earn my own keep, clean house (I can. Not saying I always do), talk baseball, politics, culture. But I’m too  (fill in the blank) or not enough (fill in another blank). It’s Mad Libs, the Dating Edition.

Of course, unwanted women are fodder for jokes. Back to the TV sitcoms, after the rejection comes the ice cream binges or adopting a bunch of cats or an awkward attempt at lesbianism.

This is one of the reasons I created Liz Gardner and Ty Hadley of “These Foolish Things.” I wanted to show one of these super alpha stud males (an alcoholic one) finding value in someone who wasn’t arm candy and/or just a goldigger. She doesn’t need him for support or social standing. He doesn’t need her to prove his status. Ty and Liz end up together because they discover they really dig each other.

The other watershed incident is Elliott Rodger and his rampage at at UC Santa Barbara. This was a guy in the “Louie” mode who got turned down by the alpha females.  I’m not including any pictures because he doesn’t deserve that much attention.

Instead of eating his feelings or getting a pet, he stabbed his roommates, got in his car and went looking for women to shoot. I started to read his 141 page tirade online and gave up. He takes NO responsibility for his life.

A friend has a daughter in her early 20s who is an attractive young woman. She is subject to a lot of unwanted attention including a strange man on the city bus playing with her hair and saying, “You’re so pretty, I just couldn’t resist” to excuse his behavior (Her mom bought her a bejeweled pepper spray dispenser).

This is the mindset behind burkas, behind blaming rape victims, behind fighting reform of handling sexual assault cases in the military. It’s why in 2012, we had a number of political candidates making stupid, stupid comments about rape like “the female body has a way of shutting that down” (Yeah, Todd Akin. You’re a douche) in order to deny women the right to control their bodies.

“We can’t be bothered to control ourselves, Ladies, so we’re leaving that responsibility up to you. Yep.” (With a big, dopey smile and some furtive “pocket pool.”)

There have been cases of fashion models in New York City disfigured by men who’d been turned down for dates (acid or knives to the face). Someone close to me revealed that she’d lost her virginity in college to date rape. And she has always been one of the alpha girls with the carefully turned-out appearance, big charming smile, flirty demeanor. This is scary shit

So, it’s acceptable for the not-so-good-looking guys to turn down the less-than-10 girls, but if THEY get turned down, it’s a denial of a right? Fuck that.

First of all: Ladies, if you want better men, START RAISING THEM. Teach your sons, your nephews, your brothers what it means to respect a woman. Trust me, they will not learn this shit from their stupid little friends and depending on the adult men in your life, maybe not from the role models around them. Try giving them a beautifully-wrapped box full of excrement to learn that the exterior doesn’t always indicate what’s inside and maybe that girl who’s a good friend may turn out to be something more and something special.

Secondly: VOTE. We. Women,  are the MAJORITY in the US. It is goddamn time we elected representatives to our state legislatures and and Federal government who actually fucking represented OUR interests and not those of Super PACs, the “Christian Right,” or those people who want to push the nation’s power dynamic back to the 1950s when white men were the undisputed kings. That needs to be stopped.