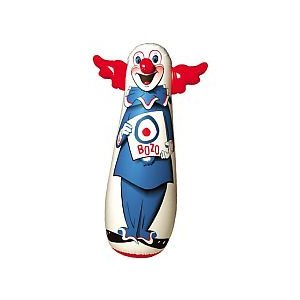 For those of you born during the electronic era, those of us had fewer toys made of pixels and more made of things like aluminum and latex. Instead of pushing buttons, we had to assemble things (that was the purpose of the toy. Seriously; Legos are not meant as a low tech security system that immobilizes intruders with unspeakable pain when they step on them), paint, draw, color with actual brushes, pencils and crayons (If you had a family dog, chances are Fido would get hold of them and the yard would be strewn with rainbow-studded dog poop. We thought “So this is what a unicorn leaves behind.” Unicorns poop rainbows. Look it up) and sometimes blow up a toy before you could actually play with it. The above toy was inflatable, the bottom was weighted with sand and (once inflated. That’s what dads are for) you could hit it with the punch you wanted to land in your little brother’s face (Admit it, you wanted to), but couldn’t because Mom and Dad would have spanked you until you bottom smoked. “You want to get corporal? I’ll show you corporal!” (Heard that one a few times))  and it would fall back, but then it bobbed right back up. I could go into centers of gravity and explain that stuff. I could if I had studied Physics, but I didn’t so I won’t. The point is: No matter how much of a beating you put on the clown, it would come back up (provided you didn’t puncture it, but that’s where duct tape comes in).

Unless you’re extraordinarily lucky, things are going to happen in life that will knock you down: accidents, breakups, financial distress (that’s been a lot more common in the past 5 years), unexpected events, illness (yours or a loved one’s), losses. You will get knocked down. But will you stay down?

I’ve read Gone With the Wind a few times, not because I love Scarlett O’Hara so much; she was a selfish, conniving, racist bitch. (I like Rhett much better.  Conniving, racist son of a bitch, but he had a heart). However, the Civil War knocked Scarlett’s easy life out from under her. As much as she wanted someone else to fix things, she didn’t have the luxury. Rather than just lying down and dying, Scarlett rolled up her sleeves, bullied her sisters and the remaining freed slaves into doing the hard physical labor necessary to survive and to hold onto her home (even though her means of doing that are probably not a shining example: she stole her sister’s fiance, forced him into behaving like a merchant instead of a gentleman, talked him into buying a lumber mill to take advantage of the post-war building boom and…read the book). Scarlett got back on her feet and kept on going.

She chose to keep going. The book painted a lot of the minor characters that she encountered in Clayton County or in Atlanta as choosing to stay down rather than change their ways to survive and thrive. They accepted poverty rather than turn their hands to physical labor or actually getting a job (trust fund babies) because to do those things was “common” or “ungentlemanly or unladylike.”

Scarlett was the boppy clown. 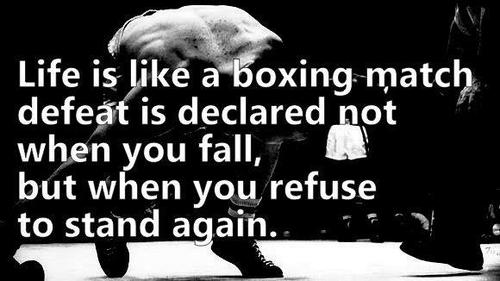 Neitzsche said, “That which doesn’t kill me, makes me stronger.”

I’m not referring to things like “I didn’t get an A on my paper” or “the cable was out all last week” or “my wedding is ruined because the caterer overcooked the salmon” (I  have confessed to watching “Bridezillas.” Good God, those women need some perspective. Throw them into the Total Perspective Vortex – see “The Hitchhiker’s Guide to the Galaxy”). I’m talking about “I lost my job,” “I lost my house,” or “My spouse left me with our kids and cleaned out the bank account.” Those kinds of challenges can knock you down and out.

In Elizabeth Gardner in These Foolish Things, At Last (coming soon), and The Baldie Chronicles (coming later than At Last), I wanted to create a character who could weather the storms without the nastiness of Scarlett (and no, she’s not based on Scarlett. Or Elizabeth Bennett from Pride and Prejudice). Someone who might get driven to her knees, but would find it within herself to rise again and keep going. I am a New England native. (I’ve lived in 3 of the 6 New England states. I self-identify as a Vermonter. I lived there longer than I did in either New Hampshire or Massachusetts and Vermont is a really cool state. Just too cold for me in the winter) Resilience is in our DNA. I’m a Mayflower descendant and if those ancestors hadn’t come back after that killer first winter, I wouldn’t be here or I would be a completely different person. (Yes, those of you who said, “Well, there would have been a lot more Native Americans,” I hear you. I’m also descended from the Lenape tribe of New Jersey. So where half of my ancestors were giving thanks for landing at Plymouth, another group was onshore saying, “There goes the neighborhood.”) I wanted that “must do” spirit to be a part of Liz. 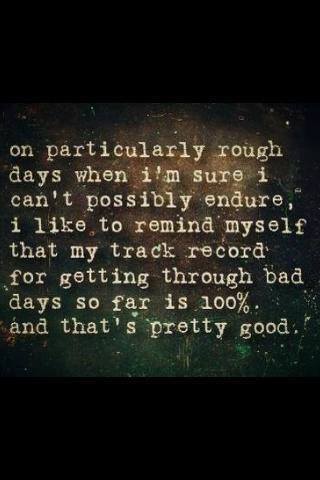 Unfortunately, the generation is rapidly dying out, but our grandparents (or great-grandparents)  survived The Great Depression, dealt with the challenges thrown at them and made it out the other side. We may not know all the stories (and there may be one or two that Grandma took to her grave), but we are here because someone chose to get back up on their feet. 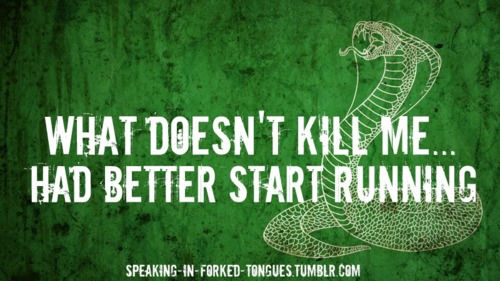