No, seriously: someone left me a comment (and I accidentally deleted it. I cannot apologize enough) who asked me what advice I would give a “newbie.”

Really? You’re asking me? Wow. Usually, I get “shut the hell up.” 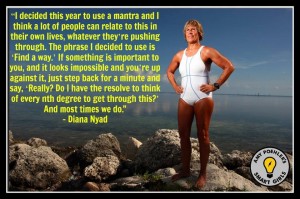 Over 35 years, she has tried to swim from Cuba to Florida. She has been defeated by seasickness, jellyfish, and tides in the past.

Not this time. She made it. No shark cage. 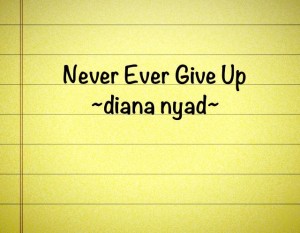 There’s the biggest, baddest best piece of advice I have to offer. 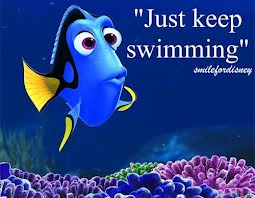 They were amused over at Diana Nyad’s Facebook page when I posted that video on there.

In my case, I wrote my book 12 years ago. I sent it out to 20 publishers and literary agents. All passed. I went back, rewrote a few things, deleted a few more, resubmitted, got rejected some more. BUT, the speed of technology change that makes your nifty swell smartphone obsolete as soon as you sign the two-year contract worked in my favor: e-books were invented. Print on demand got affordable (actually FREE if you don’t buy all the add-ons). Amazon started to court independent authors with Create Space.  Facebook, Goodreads,  and Twitter were invented so that an author could get the word out about a book without requiring a publishing house’s help in marketing (BTW, I have an ace up my sleeve in terms of an outstanding design team for things like cover art, promotional materials and even re-arranging my business cards with an annoyed sigh. Cover art grabs, Newbie. If you have a high school or college nearby with a graphic arts program, they may be able to help you out for low or no price) . I’ve even done a book signing: I rented space at an art gallery. I picked up a Square credit card reader for my smartphone so that I can take card payments (and the fact that I could prompted some impulse buys). These advances have made it possible for an independent little team (I have an editor,  a business advisor, and a legal/design team) to publish books. I kept swimming. 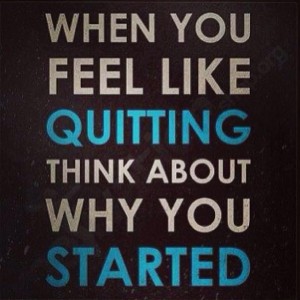 aka “See Rule Number One”

So why did you sit down with an idea, copious amounts of coffee (or Diet Coke. Or Red Bull), and perhaps a pad full of scribbled notes? Why did you stay up waaaaay past your bedtime because you had to “get this down because they’re talking to me and I don’t want to forget this” (When characters start doing and saying things without your authorization, you are on the right track, my friend)? Why do you periodically get up, walk around and talk to yourself because you’re trying out dialogue (Yes, I do this)?

When I find myself thinking “Aw, Man, this is just too hard” I remember that Jane Austen, the Brontes, and Tolstoy didn’t have typewriters, let alone  a laptop, Word, and a backspace key (my favorite friggin’ key. Delete, delete, delete). Hell, Tolstoy wrote War and Peace in longhand and that thing’s the size of… War and Peace. He was an obsessive re-writer and I’ve heard that his editor had to engage in tug of war to get his manuscripts from him. Nine drafts. Of War and Peace. And I want to whine over 100,000 words. I’ll shut up. 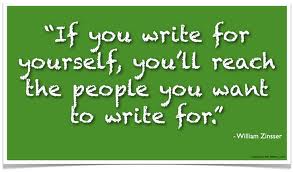 You are your first audience. Eventually, if you please that audience, others will join it.

Don’t worry about what’s selling, what other people might think; that’s how we start getting cookie cutter culture. Harry Potter was rejected all over Creation but once he was a hit, then we got wizards and extraordinary teens doing supernatural things (like Percy Jackson or the Mortal Instruments gang). “Twilight” hit and we now find our culture up to our necks in vampires. Your story about a hedgehog that becomes Donald Trump’s hairpiece could be the cause of another cultural fad.

I’ve found a lot of critics who will happily tell you what to do and how to do it (and especially what you’re doing wrong), but lack the sand to undertake your project themselves.

(Mamas: time to cover your kids’ eyes. yeah sure, like they’re reading this)

Fuck ’em. I’m part of the Author’s Forum on Goodreads and someone posted the topic “Why Do We Write?” I forget what I wrote. I know in one response, I quoted the following: 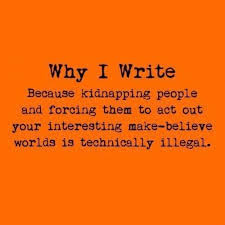 Someone decided he didn’t like my answer and replied with “Why not write for God’s glory?”

Newbie, should your story about the ambitious hedgehog run into similar critics, cordially invite them to “write your own damned story.” Do it with a smile.

2)Write to please yourself

And one of my favorite all-time quotes from Henry David Thoreau: 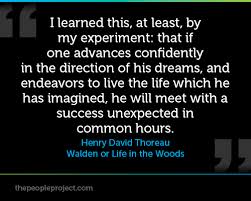 I wish you the very best. Now, go write.