So, “Wonder Woman” opened this past weekend and it’s a big hit (It’s also a great movie. I have pre-ordered it for the permanent collection). Yes, our film culture is awash in superhero movies, both good and bad, mostly portrayed by white men. And it has taken YEARS to bring the Amazing Amazon to the big screen. They got it right.

Let me explain a few things:

I was born in 1961 and part of my early TV watching was “Batman” starring Adam West and Burt Ward. (I don’t think Robin ever got out of the giant clam. I think they cancelled the show). I never bought or read comic books, but boy, did I want to be a hero. I wanted to right wrongs, and make the world a better, safer place. When Batgirl was added to the Batman cast, I was in heaven. That could be me, kicking bad guys (she never threw punches) and mysteriously disappearing after the fight was won. Of course, she had to be rescued a few times. It was the 60s.

I don’t think I knew who Wonder Woman was until the “Super Friends” cartoon started airing on ABC, and I watched that because of Batman. The only episode I remember is one where the Justice League (and a bunch of other people) were being turned into zombies and the “cure” was tying them to dead trees with dead branches. (Somewhere, Rick Grimes and Darryl are laughing their asses off at that) 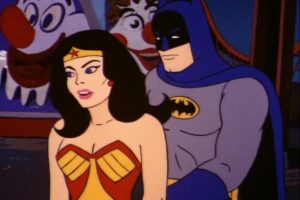 And here she is with my main man.

Here was a woman holding her own with the guys.  I didn’t care for the costume, but she was getting it done.

Understand: The Women’s Movement was still active and the ERA was still on the table (Fuck Phyllis Schlafley for eternity. She should have been the first warning shot that “Christians” were going to force their regressive agenda on the rest of us). We had Bella Abzug, Gloria Steinem, and Betty Friedan. I didn’t watch “Super Friends” regularly (my Dad developed a strict “One hour of cartoons on Saturday morning” policy and I would choose “Bugs Bunny/Road Runner”).

Even Batgirl got in on the action:

Wonder Woman was developed by a psychologist named William Marston and she was supposed to be a less violent response to Batman and Superman. Marston was a feminist (and had an interesting family life, but that’s for you to read on Wikipedia) who had a bondage kink, thinking that the powerful should relax and learn to enjoy it. And she was bound up, but she always broke free. Some see it as a metaphor for women breaking the bonds of misogyny. We’re still working on it.

Whoever draws these things has no concept of gravity, musculature, or how clothing stays in place.

Marston also developed the polygraph test. That golden lasso that makes one tell the truth? Guess where that came from. WW was created as a feminist icon. Of course, there are the segments of the population who believe that women who want equality with men are just bitter man-haters who can’t get (or don’t want) a man and they have applied the lesbian/bisexual label to her. An episode of “The Mary Tyler Moore Show” had Mary trying to relate to a boyfriend’s comic book-reading son by telling him how much she loved Wonder Woman. The kid cut it short by saying, “She’s too butch.” (the boyfriend didn’t last) 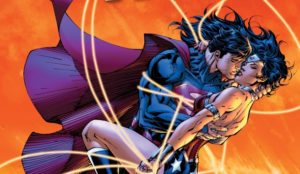 Not sure how her current boyfriend feels about that.

I saw myself as strong, smart, and able to right wrongs and wanted super powers so I could do that. (Starting with jumping off picnic table with an umbrella because I wanted to fly like Mary Poppins. Tell me she didn’t have super powers. And I was four years old)

hormones were shocked into life by a short-lived “Spiderman” series on CBS and I had my first celebrity crush, Nicholas Hammond: 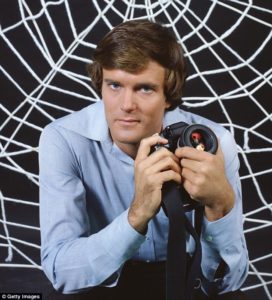 (Also a Von Trapp kid in “The Sound of Music.” Frederich)

Him, I wanted to be with.

I also loved “The Six Million Dollar Man” and “The Bionic Woman,” but Jaime Sommers was a slender, athletic woman that I couldn’t relate to.

Something to keep in mind for the next section: around this time, my mother had started projecting her weight and self-image issues on to me and the campaign of harassing me about my weight, exercise, and dietary habits began, and did not end until she died. 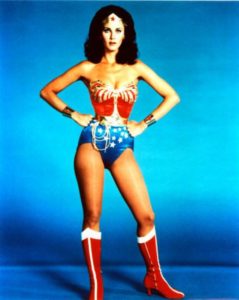 She wasn’t a skinny little woman like Jaimie Sommers or Charlie’s Angels. Nobody around me called Lynda Carter “fat.” She was allowed to be smart on the show, too. Nobody told her that boys don’t like it when girls are smarter than they are, or called her a “showoff.” Diana Prince would find a place to hide, take off her glasses, spin and POW!, there was Wonder Woman running to the rescue (I noticed that when she ran, the spike heels were replaced by flats).

She did the rescuing and saving.

“Star Wars” came on the scene and I moved on from people in costumes to Jedis, because robes seemed more practical and I had recently read “A Gift of Magic” by Lois Duncan, so I was into telekinesis and extraordinary mind power.

Flash  forward a few decades. I’m middle-aged and focused on other things.

I saw the publicity stills of Gal Gadot for “Batman v. Superman: Dawn of Justice” and my thought was “Good casting. Looks like they got it right.” 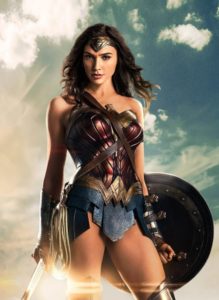 I’ve been to all the Batman and Superman movies from Michael Keaton and Christopher Reeve on down to Ben Affleck and Henry Cavill. And that movie was not great. However, during the climactic battle sequence, when Batman is about to become a Bat grease spot,

They even gave her a killer guitar riff for theme music.

Yes, Marvel has the Black Widow and Scarlet Witch as part of the Avengers (and I prefer Marvel to DC because they have a better sense of humor). But they’re part of the group and need saving by one of the guys  from time to time.

Thursday night, Wonder Woman did the saving (probably the DC film franchise as well as Steve Trevor and a Belgian village).

I met a woman wearing these: 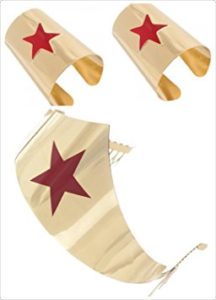 They are for sale TO ADULTS on Amazon. (Perfect retailer)

Her husband told me, “She’s been waiting 45 years for this movie.”