I could go into some windy explanation as to why I haven’t posted but the plain truth was…I didn’t feel like it. 2022 was not an inspiring or motivating year for me.  It was just 2020 Part 3, and the plot remained the same through all 3 episodes: work, go home, sleep, work, go home. This is the rut that had me panicking as a teenager about graduating high school and college and then becoming an office drone, doing the same thing every day with 2 weeks vacation every year. I wanted my life to have more creative elements than that. I like entertaining people and balancing ledgers, calculating income, and trying to explain why you’re right to someone who is determined to “keep you in your place” and refuses to listen (then gets the whole fanload of smelly consequences in the face because they didn’t listen). It’s a grind. These past 3 years, I’ve made forward strides in security (as in, I now own a home) and pulling together my life (literally. I emptied out two storage units, one of them 300 miles away, one of them 3.000 miles away). It was costly, it was a gamble, but it’s done.

I took a coding course in 2018 at Palm Beach Coding School and earned a certificate for Web Design. I have a Facebook page called “The Grand Duchy of Medieval Merriment” (and yes, I am the Duchess. I’m also selling titles, so if you want to be a Lord or Lady, $20 will get you there). I have had ambitions of expanding it beyond just a meme and joke page. I designed a website with a couple of games, with text, and with a “shop.” My instructors said it was the coolest site anyone had designed for class. I carefully held on to the coding through a couple of moves and even the hard drive dying in my laptop.

The page has become a Grand Duchy in the interim (with a crest, a flag, and even a map!), so those elements would have to be included, and there’s a shop on Zazzle selling merch. That would have to be included, but it’s okay: I have my basic code, I have my notes from class and “Building Websites for Dummies” as the mental WD40 I needed to shake off the rust and make the virtual a reality.

Or so I thought.

Yesterday, I went to upload all that fun code and…

It’s gone. All gone. Even Geek Squad couldn’t find it. It didn’t survive the Great Crash of 2019 (laptop had to get a new hard drive). No fonts, backgrounds, text, images. Nada.

If you watched “Sex and the City,” you know there was an episode with Carrie’s hard drive crashing and learning the hard way about backing up data. While I did not wrap my Toshiba in a pashmina to take it to Geek Squad, I did learn the same lesson in the same fashion (although NOW we have the Cloud. Of course, “Nope” taught us that the Cloud may not be what it seems, but…)

I also love “The West Wing.”  In “Galileo” ( Season 2, I think. It aired November 29,2000), NASA and the White House are planning an event around a Mars probe to be televised in schoolrooms across the country. They never get the signal from the probe, and the debate is whether to go ahead or not.

I am a feminist, a fan of Elizabeth Warren, and anti-fan of Mitch McConnell (read “The Cynic: The Political Education of Mitch McConnell”). In an attempt to condescend to Sen. Warren, in an attempt to put her in her place, he took to the Senate floor to complain, and even though I am loathe to give any sort of credit to that chameleon crossed with a jellyfish crossed with Satan, he did give me a motto. It’s been made into wall art, into stickers, into tattoos (which I’d consider, but I’ve been getting so many MRIs lately, it’s probably not a good idea. Metal in the ink). I have the sticker on my laptop, and my coding instructors commented on it during graduation because I had had issues with learning some of the languages: 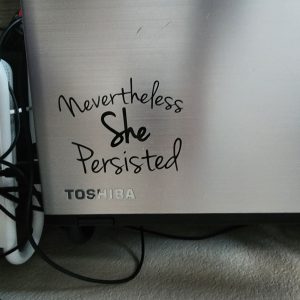 Yeah. It’s what I do. Just ask anyone i have exasperated over a 61 year existence.

Carrie Bradshaw got her new hard drive (and an external backup) and continued on. CJ Cregg persuaded NASA and the White House to go ahead with the broadcast for “the kid in the back of the room afraid to raise his hand. Let’s show him sometimes the big boys get it wrong” and it’s okay to take a chance.

So in addition to that sticker, over my personal desk (as opposed to my work desk), I have a copy of the first check I got for writing, the copyright certificate for “These Foolish Things,” the photo and autographed ticket from “The Perfect Storm” premiere where I met George Clooney and made him laugh, and an important picture of me with my dad and he’s beaming because I’d just gotten sworn in to the Bar of the Supreme Judicial Court of the Commonwealth of Massachusetts after taking the bar exam 3 times (missed passing by .67 points on the first try, and by over 20 on the second try. They don’t tell you how you did when you pass).

I also have these two pieces of wall art: 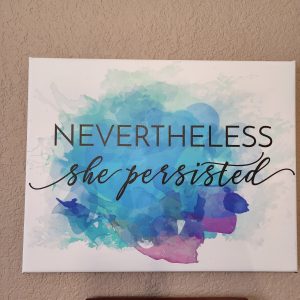 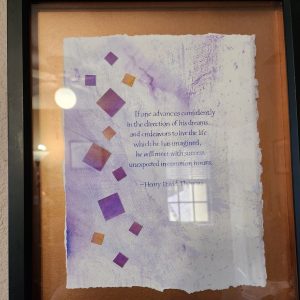 It’s Thoreau and says,”if one advances confidently in the direction of his dreams, and endeavors to live the life which he has imagined, he will meet with a success unexpected in common hours.”

Okay. I did this coding before. I can do it again. I can make it better, more interesting (well, now it’s paraphrasing “The Six Million Dollar Man”). I can make the virtual Duchy a virtual reality.

Because I persist. And because, I need to advance confidently in the direction of my dreams.

Let’s take it from the top, and…