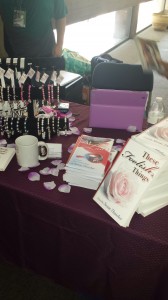 June 21, 2014, Long Beach Public Library saw a gathering of writers and readers (including the writers reading their stuff OUT LOUD. Gulp)

And since my motto lately is “Do what you can with what you have,” until I figure out how to pry photos from my ailing computer (Really, Mario, your timing sucks), WYSIWYG (What You See Is What You Get).

As  far as sales, I sold 4 books, which is a new personal best for a signing event (including the solos at the Green Door Gallerie – NOW CLOSED).

We were required to donate a copy of our books to the library’s collection, which I did happily.  I like the idea of people discovering Liz and Ty (and Millie, Joey, Angie, and Beanie) through the library.

We also had to read excerpts from our books. I was in one of the first panels with Kimi Flores  of “It All Started With a Lima Bean”

Also my tablemate. Nobody elbowed anybody else.

Lorenz Font (Tormented), and Jessica Gibson (The Harder I Fall). Did I get pictures? I don’t know – the computer won’t share. The ones above? Thank God for smartphones (also useful for taking payments)

We had a good time, about 20 authors, including Wade Lefevre (whose “Snipe Hunt” is gripping and scary), and 80 some readers.

You get to feel like a real rock start at these things: you’re signing copies of books, people want you to autograph Kindle covers, and pose for a photo with you (incentive to get some Nerium from a friend of mine and drop some gross tonnage).

As always, I had my trusty assistant/sidekick, Sandy Esparza, with me. No, I didn’t get any good pictures. Selfies are not my thing.

I’ll work on it. Or make Sandy do it.

So,  emboldened, I have signed up for other signings. In other parts of the country. Definitely in Austin, come Feb 7, for Deep In the Heart, and Wilmington, NC October 24, 2015 for Life’s a Beach. Sadly nowhere near the Sanitary Fish Market (What? Okay, I’m allergic to fish, but they turn out mean hush puppies and chicken).

2014 has been the year of chaos reigning* so far. Things have stabilized on the personal front (No, I’m not going into details, but the wild horses have been reined in** and the wagon is headed in the right direction. For those who have grumbled at me about not publishing anything recently; Look, survival mode takes a lot of attention and resources. Writing fiction isn’t high on the priority list when you don’t know where you’re going to live, whether you have enough gas in your car to get to work, or how you’re going to stretch that $5 in your pocket for food until payday at the end of the week. Hawthorne may have been filed from his job as a customs clerk (He sucked. So does “The Scarlet Letter.” I read that thing 3 times, once voluntarily and twice as part of literature courses), but he had a wife. I’m a solo act. If I don’t do it, it doesn’t get done. I digress.

*This is the correct usage for “reigning.” With a “g”, it refers to ruling. Most people mistakenly (and stubbornly) insist on using it as “reigning in,” which should properly be spelled** r-e-i-n-i-n-g, as the term refers to controlling a horse. Should you be close enough to such people, please explain the difference, then beat the ever-lovin’ stuffin’ out of them for not having mastered 5th grade level vocabulary).

Mark your calendars: June 21, 2014 from 12 PM (High Noon) to 5 PM  at 100 Pacific Ave, Long Beach, CA, I will be selling and signing books at  Reading By the Sea along with the other authors listed. I met some of these great folks at Authors Under the Lights in March and I’m looking forward to seeing their happy little faces again. I will have a game going to win a set of signed books (Mine) and if you buy a set of signed books, you’ll be entered to win a raffle (as well as the raffles they’ll have). We’re not talking Publisher’s Clearing House here, but it’ll be cute.  You get stuff. Stuff related to MY books.

(Well, that didn’t turn out as snazzily as I had hoped)

Since I have not had a great paying job since October (thus the survival mode) and I need promotional materials for the above mentioned Reading By the Sea event…that’s given me some gray hairs (which should delight my sisters. They’ve been waiting for almost 25 years now). If you click on the link, it’ll take you to a page that shows you what I want for this endeavor and how much the various items cost. I’m over halfway to my goal of $300 and I have an offer for super donors: $100 gets a minor character named after you or given the (reasonable) name of your choice in my current Work in Progress “The Baldie Chronicles.” (Prequel to “These Foolish Things”) The character will either be a group therapy participant or an oncological nurse (male or female), but will have a couple of lines (No, you don’t get to write those). So, click the link and GO FUND ME.

Back in 2011, I was going to the gym 6 days a week (3 days of weight lifting, 2 yoga classes, a Pilates class, and 5-6 days of cardio). I haven’t been in a while (try since October when the good-paying job went bye-bye, probably to Bangalore), so it would be foolish for me to walk in and just try to pick up where I left off. A walk around the block is a good place to restart.  Same thing with writing; if you’ve fallen out of the habit and rhythm of daily writing (something other than email or Facebook), it’s foolish to think you can just dive back in and pick it up again where you left off. But, I’m getting there.

I will get caught up on blogging, writing, etc. I will get back to talking about things like the “Louie” episode on fat women dating, gratitude and manifesting things in life, that kind of stuff. Right now, though, I just needed to “go for a walk around the block.”

Oh, and on a final note, let me leave you with this review:

May 16, 2014Sue1958 rated it 4 of 5 stars
Let me start by saying, I read a LOT of books, so you can imagine how you can get a lot of the ‘sameness’ throughout certain genres right?

I love a good romance sometimes to break up the books I read, ones that I don’t have to put my mind set in gear and just read with my eyes and enjoy.

So I picked up this one!

I was hoping it wasn’t going to be [what I call] a soppy romance. It wasn’t.

I hoped that it had some ups and downs in it [and not just in the bedroom!] It didn’t.

I hoped that there was going to be a storyline to it unlike some romances that can get quite irritating at times [if you know what I mean] It didn’t.

I really hoped this was not going to be the “perfect Alpha Male” type read that is all so popular at the moment. It wasn’t!

This couple were flawed, they were imperfect, it was GREAT. There were all kinds of emotions in this book. I really liked it, yes it was a romance, but a lovely romance.”

On Saturday, March 22nd, S.C. Ellington and Dani Hart will present the first annual Authors Under the Lights, a multi-genre book signing event designed to bring indie authors and readers together to support a charitable cause. This year is devoted to Hope for Hazel. Hazel is a local three year old girl who was diagnosed in the last year with stage 3 Neuroblastoma. You can read about her and her family’s heartbreaking and touching story and make donations at www.ourlittlehazelnut.blogspot.com. More information on the event can be found at www.authorsunderthelights.blogspot.com.
“We started this amazing annual event to celebrate the hard work and struggles of authors in the self- publishing world and to give back to the community at the same time. We chose this particular charity because I know the family and wanted to be able to help in any way I could. While raising money seems so inadequate in comparison to what they are going through it’s something,” states Dani Hart, a self-published indie author. Dani can be found at www.authordanihart.blogspot.com. S.C. Ellington can be found at www.scellington.com.

At the book signing readers and fans will get the chance to meet and take pictures with their favorite indie authors, get their books signed, as well as take pictures with many of the cover models featured on and in the books. There will also be a raffle giveaway with amazing prizes donated by the authors and sponsors to raise money for the charity. A silent Model Auction will be featured at the book signing where bidders get the chance to bid on attending a VIP dinner with the models and their authors after the book signing to raise money for the charity. Tickets can be purchased at http://www.authorsunderthelights.blogspot.com/p/ticket-sales.html.

It’s that time of year (and feels like it has been since August with the Christmas creep that has now caused ornaments to go on sale prior to Halloween. How soon do we see Uncle Sam and Santa Claus duking it out for Fourth of July attention?) 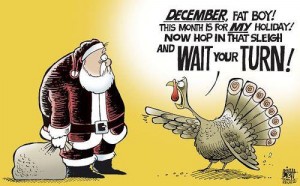 It is, in fact, actually December (which is zipping by like the Little Old Lady From Pasadena driving a Shelby Mustang) and winter and within 3 days of Christmas (7 days of 2014. From what I’m hearing, 2013 will not be widely mourned when it leaves), therefore, it is the right and proper time to discuss Christmas.

I would like a few things for Christmas (if anyone is reading):

1) If you read and liked them, please leave reviews on Goodreads, Amazon, Shelfari (Amazon version of Goodreads), Barnes & Noble, Powells, Alibris, Vromans, Smashwords. (If you didn’t like them, say nothing. Here’s 20 bucks)

2) Please recommend these books to your friends. And have them recommend it.

3) If you have the paperback(s) and are on Facebook, please go post a picture of you with them on my author page (Susan Thatcher Author Page) and tell me where you live. 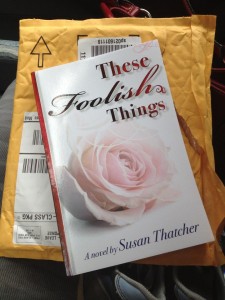 This little fellow traveled to the wildest reaches of Washington State. May have been ordered by a bear for something to read before hibernation. Or by a sasquatch.

4) If you got an ebook, post a picture of it  on Fracebook and request an autograph (yes, there is a way) through Authorgraph.

5) Ask me questions; let’s get a discussion going. There are threads started on Goodreads and Amazon asking how readers would cast movie versions.

6) In a book club? If I can figure out Skype (or Google Hangouts), let’s talk (Warning: I will periodically be removing cat butt from in front of the screen) 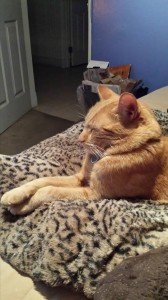 The bottom line is: the best Christmas gift I could receive is knowing that I have made a connection to you, my readers.

Cheers and to all, a good night.