Written by Mindy Kaling (this is important)

Emma Thompson and Mindy Kaling walk into a bar…

Mindy Kaling stars as Molly Patel, a showbiz outsider who longs to be an insider. Like the actress who plays her, Molly has a great sense for comedy and timing.  I don’t want to spoil things, but as a chemical plant quality analyst in Pennsylvania, she comes up with a brilliant plan to get an interview as a  writer for the show she has loved and studied since she was a kid. 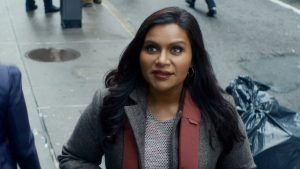 Emma Thompson stars as Katherine Newbury, the host of a late-night talk show, “Late Night with Katherine Newbury.”  It’s a somewhat intellectual show, but in danger of going under because ratings are flat and dropping. She won’t engage in Jimmy (Fallon/Kimmel) hijinks with her guests. And her guests aren’t the kind that would necessarily indulge themselves. Doris Kearns Goodwin in Tight Pants? No. Just no. Katherine is not your warm-fuzzy type of personality. In fact, she is rather detached, especially what’s going on with her show and with the people who work for her. I wouldn’t call Katherine a bitch. She’s not knifing anyone in the back (although, there comes a twist in the third act). She’s not out to emasculate her all-male writers room. She  is stubborn and not a fan of change, thus the 10 year decline in quality and ratings. The show is safe and stale, but she won’t see it.

The talk show host who came to mind as I watched was not Samantha Bee, but Dick Cavett. Same higher-brow content, same dry humor. 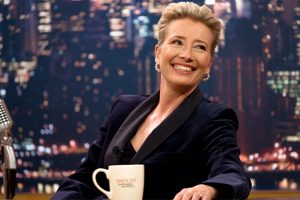 Katherine is a tough boss. She is not portrayed as an unreasonable demanding bitch, like Meryl Streep in “The Devil Wears Prada” (another workplace comedy). She’s intelligent and intellectual and knows what she wants. Unfortunately, it’s not necessarily what’s best for her or for her beloved show. As mentioned, she is detached from what’s going on with her staff (one guy died years ago and she didn’t know), or the changes in the world. At one time, Katherine herself had done stand up (Emma Thompson, before we in the US came to know her, had been performing sketch comedy for years with Hugh Laurie and Stephen Fry, among others). Her sense of humor is displayed in some of the cutting remarks she makes in defense of her positions, and in an unplanned stand-up set. it’s a step forward in depicting powerful women. Representation matters.

The network president, a talent agent, and the writer’s room all want Katherine to change her format to the more sophomoric ones put on by the late-night guys.

Molly’s opening into Katherine’s world is precipitated by Katherine firing one of the writers who asks for a raise. When she says “No,” he protests based on having additional expenses due to a growing family. The firing isn’t because he asked, it’s because he  objected and based the request on HIS needs rather than warranting a raise for a greater contribution to the show. Katherine tells him it’s sexist. (Okay, so we do have some preachy) She’s right in that his reasoning has nothing to do with his work. Sound logic. Good business sense. However, because she’s not giving in to the emotional appeal (“Please, Sir, may I have some more?”), she seems heartless. Katherine isn’t. She’s just thinking more practically. More of what we perceive as “masculine thinking.” The writer fires back that she’s a sexist because she does not work well with other women. There are some facts to support this: Katherine has a dismal track record of retaining female staff.

The writers for the show are all white men, most have Ivy League credentials on their resumes, and the head monologue writer, played by Reid Scott (“Veep”), was expecting to have his brother hired for the open slot. His brother who had run the Harvard Lampoon. That’s a solid credential. The first time Molly goes to sit in a meeting, they deny her a seat at the table, literally, saying one open chair was for a guy who was running late because he was trying to sort out a now long-distance relationship. She end up sitting on a waste basket. This is what you call a visual metaphor. An even greater one is that, since women were scarce, the writers have been using the ladies room when they shit, something Molly learns the hard way. I’ll come back to that later.

Before I go further, let’s delve into Molly’s creator/portrayer, Mindy Kaling. She had the same education track as those writers, a top private school in Boston, BBN, then graduated from Ivy League in 2001 (Dartmouth. Big whoop. We at UVM routinely eat their lunch at Winter Carnival. Go, Cats, Go), interned for Conan O’Brien, did stand-up, and began with the American “The Office” in 2004 as a write/performer, for which she won an Emmy as a writer. After “The Office,” she went on to “The Mindy Project,” creator/lwriter/producer. This is her big screen writing debut, I believe, but my point is that Ms. Kaling knows her stuff. She is intimately familiar with writers rooms, television production, comedy, lack of representation. They tell you “write what you know.” She has. Some of the casting reflects her experience as we see faces we know from “The Office” (Amy Ryan) and “The Mindy Project” (Ike Barinholtz).

You get the idea, Molly has to prove herself to a bunch of skeptics and wants to save the show. From the outset, she’s depicted as intelligent, driven, and willing to think outside the box to achieve her ends. So, we have an underdog to root for and we have a near-impossible task we want the underdog to master. And the focus is on Molly’s work rather than her personal life. (“Why are you making a point about that?” We’ll get there) So this is a workplace comedy.

This movie hit my feminist nerve endings from nearly the start. Not in a bad way. I mentioned the the writers preventing her from taking a seat at the table. The fact that the Late Night writers were all white male. Racial comments were made. Sexist comments.

The biggest metaphor for me was the men using the ladies room to shit. And continuing to use it even after Molly’s arrival. What bugged me was when, in the middle of Molly having a private breakdown in what is supposed to be a ladies’ room, one of the guys comes in to do his business. They have a quick, somewhat sympathetic exchange over her meltdown, but he still insists on using her facilities and SHE LEAVES TO ACCOMMODATE HIM.

My God, that pissed me off no end! Yes, there’s something to be said for him insisting on still getting his way, but goddammit, she should have yelled, “GET THE FUCK OUT OF HERE AND DON’T FUCKING COME BACK!” Ms. Kaling is a damned good, very experienced writer, but this was a missed opportunity for Molly to claim some power and autonomy.

What also pissed me off was the twenty something white man sitting two seats down constantly fiddling with his phone during the movie, at one point, something loud started to play. I yelled at him. With support. It was analogous to what was going on with the movie. People, if you want to talk or fart around with your toys during a movie, do the rest of us a favor and wait for it to come out on Red Box, huh? You have a responsibility, when out in public, to behave in a way that is considerate of that public. 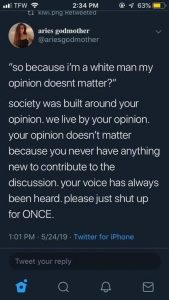 The above picture speaks volumes. When yours has been the only voice in the room and things aren’t working so well, perhaps it’s time for different perspectives. Part of the ongoing snark in the writers room was how, as a woman of color, maybe the writers (or the brother of the head monologue writer) could gain advantages in hiring. The boys’ clubs in certain industries weren’t established so much as treehouses with no girls/people of color/LGBT/different religions allowed as they were networking within an insular sphere. Nepotism. Friends of friends. Alumni of the same college. Fraternity brothers. It’s a tribal thing: we will favor the members of our tribe until there is no room for anyone else. This dynamic plays out in the men in the story pressuring the star of the show to do what the men are doing, things. Rather than working to perfect what she’s doing, they insist on things being done their way, their idea of what’s funny. The threatened replacement for Katherine is a male comic in the same age range as the writers.

I’ve worked in the financial industry on and off for 35 years and I saw it up close and personally: in the mid-1980s, we had the invasion of the “Suits,” who fit one of the above categories. Didn’t know what in the hell they were doing, but damn, they got promoted fast. I spent a lot of time talking to angry customers cleaning up after the messes they’d made.

But, Molly shows her smarts and eventually wins over the other writers. And that brings up another thing that bugged me:

It’s a workplace comedy. There was no good reason for trying to go to romcom territory. 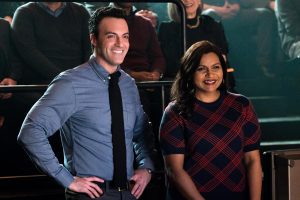 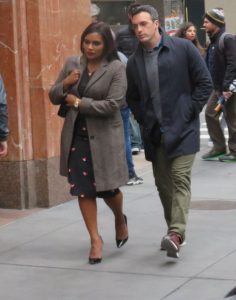 The guy in the blue shirt is Reid Scott playing the “Head Monologue Writer.” The guy on the street is Hugh Dancy playing one of the other writers. There are subtle undertones of working towards a romantic relationship (very subtle) with the Reid Scott character, and a flirtation with the Hugh Dancy character that ends abruptly. He is where we get the #MeToo content, but not what you’d expect. During their first flirtation, he mentions it taking 3 weeks to get her into bed and that’s treated as something cute. While this movie could pass the Bechdel test (Two women having a conversation that doesn’t center around men), given the subsumed hostility of Molly’s work environment, romance just doesn’t belong. And it’s not necessary. Ms. Kaling has made comments that Valentine’s Day is Christmas Day to her. Okay.  That’s your thing, Mindy. In my perspective, when it started to come up, my response, “Aw, Jeez! Really? Do we need this?” This is how women get stereotyped: always looking for love. This sort of subplot is why, even as late as 1998, women at my law school were told that we were just there to find husbands. (If that was the case, it’s an expensive damned method you’ll pay for the rest of your life. Literally) What I loved about Molly, is that this was the first time I’ve seen Mindy Kaling play a  major character that wasn’t “bubbly,” obsessed with pop culture and shopping, or boy-crazy (Kelly Kapoor and Mindy Lahiri, her two biggest roles prior to this one. Mrs. Who in “A Wrinkle in Time” doesn’t count). Are women not interesting if they’re focused on a goal other than a romantic relationship?

The romantic comedy element, though distracting, did not ruin the story for me. I liked that Molly found her way on her own. No mentoring from within the boys club, you know, no “I’ll help you, Little Lady.” Molly solved her own issues. Molly breaking into a rarified world isn’t about race or gender. It’s about making the argument using your own skills and merits.