Okay, that’s a bit grandiose, but I’ll stick with it.

By the way, this is the first post I will write completely on an iPad. I am not a Luddite

(go look it up. If you attended Franklin Pierce Law Center aka Frank’s, Buzz Scher would apply this term to Jim Duggan. Of course, Buzz also called me a bastard in our Trial class because I’d convinced Yvonne Imbert to go along with a couple of pranks during our presentation to make him laugh for the first time after a couple of terrible weeks),  I just presently don’t have the budget to indulge my taste in electronics with bells and whistles.  I blame some of you guys because if my stories were selling as they deserve to, I could. Go talk people into buying my books. Now. Go do it and then come back. 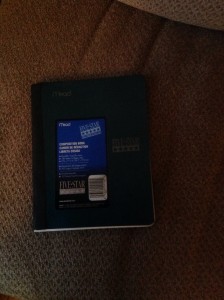 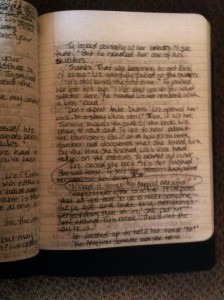 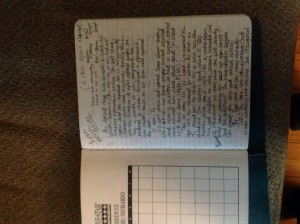 The picture shown above (and by the way, Luddite or not, I am not finding this iPad to be as easy to use for this as Mario, my laptop. What? You don’t name your important stuff? Weirdo) is the original document form of “These Foolish Things.” Really. El Cheapo composition book from CVS bought on he way out of Boston for a 70 mile bus ride to Concord, NH. This was December 2000, ski season, so the 70 miles would take 2 and a half hours on a Friday night. Fun.

Anyway, I had been thinking of an idea for a love story that was the opposite of a straight up courtship story. You know, they meet, they figure out they love each other, “happily ever after.” What about the other end of it? (You’ve heard this)

So, I got the book and pens and just started to write. The following pictures (if i can get the iPad to cooperate) show the process of “I like it. Eh, maybe I don’t like it. Screw it. What was I thinking? It’s gone.”

Technology is good, but sometimes there is no better connection than the mind/hand to keep the creative process flowing.

Maybe, one day this composition book would be valuable to academics, a relic of the time before word processors and crashing hard drives (Mario, don’t even think about it). Not Shakespeare folio valuable, but certainly worth more than say, Justin Bieber’s diary. Or Kim Kardashian’s next sex tape (oh, you know there’s going to be another one that’ll be released mid-divorce).