If you follow me, all five or six of you stalwart stubborn folk, you know that I’m supposedly working on a historical fiction series at this time. This is comical because I started, and got the “Oh, God, what the hell was I thinking?” mindset, which is quite common among authors, and the mental writing police immediately put up roadblocks as they are wont to do. Little bastards. 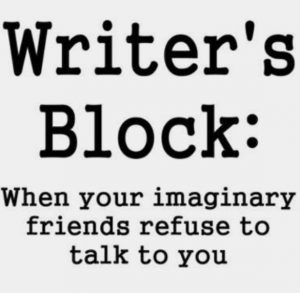 Part of my anti-block therapy (which is really just feeding into a research addiction) is to get books (I know that should say “read books,” but did I mention that I like to shop and Amazon was foolish enough to give me a credit card?) about all the minutiae of the subject I plan to write about, like clothing, historical backdrop, ships (seriously), firearms, law, etc. I have done that. 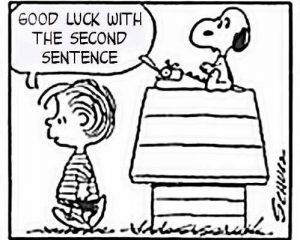 I also burn candles and do vision boards. When it comes to procrastinating, I am creative.

I’ve taken care of the stressful things that I was blaming for my lack of words in a form visible outside of my brain. I have shopped until I dropped and found inspirational images… 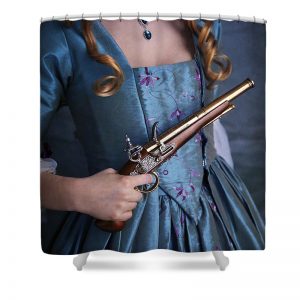 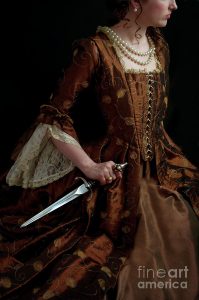 “Chicks with Guns and Knives,” a working title (and the image on the left is a shower curtain. No I will not buy it).

First truth: I am not really a romance writer. There, I’ve said it. When I was a tween and teen, I would Hoover up all the historical romances I could lay my hands on at the library (and ran up fines on a monthly basis for being late with a LOT of books) and go through them like a bulldozer. Regency romances, the Almacks patroness of the historical romance genre (and if you recognize the reference, you are also a consumer of them), Barbara Cartland, with essentially the same delicate, feminine heroine (time periods ranged from 1790s to 1910. According to Barbara, she didn’t want the men wearing wigs from the early end, and didn’t want to get too modern and WW I on the other end. Fine by me) who was either broke and at risk of being exploited or fading to nothing in the countryside, or wealthy and at risk from fortune hunters. Until the hero swoops in and saves her, at which point our girl would inevitably develop a severe stammer and couldn’t get a sentence out in less than 3 paragraphs. Lots of ellipses. Es.

Whereas teenaged me soaked that stuff up, grown up me sits back and says, “Really? She’s not pissed off? There’s a gun on the table and she’s going to wait for someone to come in and use it? While the bad guy is threatening to rape her?”

There is also a category that I loved of women who went from poverty and abandonment to self-made wealth and power (Not always happily, but if it was smooth sailing all the way, it would be boring). “A Woman of Substance” by Barbara Taylor Bradford caught my attention. She didn’t wait to be rescued or look to marry well. Emma Harte rolled up her sleeves and got to solving her own problems. Romance was not the central theme, but she got her heart broken a couple of times, then got on with her life and taking care of herself. You also get a variation on this with “Mildred Pierce.” Mildred is abandoned with 2 girls by her husband, gets a job as a waitress, works her ass off, opens restaurants, gets wealthy, and gets her heart broken again by a cad she married (fortune hunter) and who had an affair with her daughter (Ick). It didn’t end well for him.

I love Jane Austen, but the Bennett sisters and the Dashwoods were simps for waiting to be married well and have someone rescue them. Sorry Jane, but you set a tone here that’s been duplicated. A lot.

Now, I get that Austen was writing in the mode of her times when women were sidelined from making their own way in the world sans husband (the exception being a companion to an older relative in hopes of getting an inheritance. Essentially, waiting for rescue). In the film version of “Sense and Sensibility,” Elinor Dashwood speaks to the rock and the hard place of modestly well-bred women with no great fortune to attract suitors and essentially barred from earning their own living (I think that was more Emma Thompson than Jane Austen, but I’ll take it).

(Personally, I gave up hoping for rescue a long time ago. No takers. Enough rejection and you get the message. You’re on your own)

When I got older, I discovered the historical novels of Amanda Quick (aka Jayne Anne Krentz). She wrote Regencies, too, but her heroines had scholarly interests in things like how seashells formed, or illuminated manuscripts. The heroes didn’t try to change the girls, but became intrigued by their passions (or were already rivals on the hunt for a particular manuscript), and fell for the smart, independent women they were. Now we’re talkin’.

The second truth: I am out of excuses for not progressing on this story. I’m not worried about a publisher; whatever Amazon is calling Createspace these days makes that unnecessary. Either people will read these books or not. Getting at least 2-5 in the series in published form will give me a good reason to hit the book fairs again, so I can see my author friends in person.

But…I have one more procrastination trick up my sleeve.

There’s a certain “voice” in writing historical romances. The language is more formal: you can’t have your heroine saying “Yeah, right, I bet” or “that’s so gross.” She would be more likely to say, “I do not believe you” or “Heavens, that’s disgusting. Ring for the maid to clean it up.” (Servants. Always. Even the “whatever shall we do?” heroines living in genteel poverty have faithful old family retainers who seem to work for them out of love, loyalty, and hopes of better days when maybe they can collect 25 years of back wages). I don’t quite have that voice.

An excuse for more research! And books in the genre to get my head back into the game! Shopping! Goodie!

(I just grabbed a cover from Google)

Julia Quinn to the rescue (Yeah, yeah, yeah, I know – I’m not into rescues. I’m a hypocrite. Go suck an egg. See? I don’t have the voice. Yet)

I watched the Bridgerton series on Netflix and enjoyed it immensely. Took me a minimal amount of time because I stayed engaged. I had not heard of the series before the TV show. Right off the bad, some of the tropes were turned upside-down (the teenaged girls who were not part of the debutante/ballroom world were no shrinking violets). There was humor. It wasn’t all genteel. Julia Quinn had done to the Regency romance genre what I would have done years ago; taken it, shaken off the tired, rusty pieces, and infused vibrancy by tweaking things a bit. Atta Girl.

So, the deep dive? I got all the books from Amazon, and whereas my reading lately has been heavier slogs (“The Diabetes Code” by Jason Fung. Two posts back, I discussed my recent diagnosis. This book has helped a lot). I have some leisure time, and I am going to immerse myself back in the Regency world and good writing, then grab myself by the scruff and get my damned books done and out in the world.

Wish me luck. I have candles burning.

I’ve been reunited with an old friend I haven’t seen in 10 years. 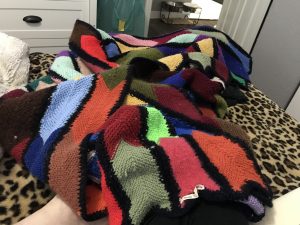 Yeah, it’s an afghan. My grandmother made it for me when I was a preteen or early teens, so it’s nearly 50 years old, and through the last two decades, unfortunately, it’s mostly sat in a cedar chest in various storage units. I was in danger of losing it a few times because I fell behind on paying for the storage, but it’s with me now. 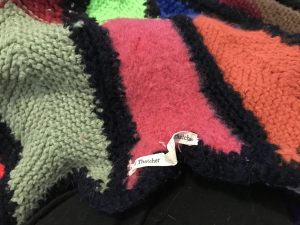 Gram put these name tags on the sweaters and afghans she made for us. She got them to sew into my dad’s clothes when he was a kid. I’ve no idea how old these tags are.

It was knitted from whatever leftover yarn she had, and it’s a blend of polyester yarns and wool yarns. I just had it dry-cleaned.

This afghan covered me while I was in grade school and high school. I slept under it at the University of Vermont. It has followed me from Vermont to Massachusetts to Florida to New Hampshire to California, and finally caught up to me in Florida again yesterday.

I hadn’t thought I’d be so emotional about getting this blanket back, but I am. I’m looking at it and remembering my grandmother and her knitting. Seriously, if you sat her down in front of her stories (CBS soap operas) with yarn and her knitting needles, she’d cast on at the opening of “As the World Turns,” and have a pretty good start at a sweater by the time “The Guiding Light” came on. You can see on the back where she shifted from one color to another. Knitters can analyze it. 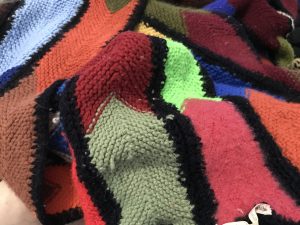 She made one of these for each of us kids. I shared a bedroom with my sisters and I can remember my sister wrapping herself up in hers like a multi-colored cocoon as she got ready to sleep.

My cats liked nesting in it and there was plenty of blanket to share. None of them clawed or chewed it or had an accident on in. Just kneading and snuggling into it.

This afghan and I have seen a lot of days. June 1 marks my 60th trip around the sun and, cliched though it is, I am conscious of time and not having as much of it. Life is no longer ahead of me, it’s mostly behind. I have made and lost friends, lost blood family members and soul family members. I’ve missed out on typical experiences like finding a spouse (no takers) and raising a family. Curiously, no one ever begged me for grandchildren. Maybe they knew something I didn’t.

On the other hand, this afghan was with me as I wrote my first book, a short stand up routine that I performed in Boston and L.A., sketches for a successful stage show. I met my celebrity crush and didn’t sleep under this afghan the next night. It has seen me through physical sickness and days when I just didn’t want to get out of bed because life was something I had screwed up badly and didn’t want to face it. 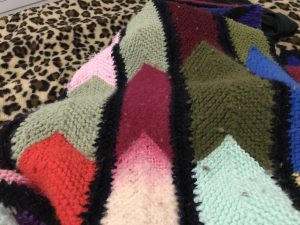 Purchase Edge of Fear on Amazon

Ink and sawdust meets brisket and moxie
I’m a tattooed casualty.
A charmer, a fraud, a skeptic, and a carpenter.
My name is Tse.
I’m cocky enough to believe my own lies, but too oblivious to see the truth is already out there.
I’m a cautious perfectionist.
A sister, a scrapper, a dreamer, and a workhorse.
My name is Sophia.
I’m capable enough to plan ahead, yet too powerless to avoid getting blindsided.
We’re complete opposites—one who plays it safe, the other a thrill-seeker—but when old sins resurface bringing violence to the present, our path forward becomes clear.

USA Today bestselling author Freya Barker loves writing about ordinary people with extraordinary stories.
Driven to make her books about ‘real’ people; she creates characters who are perhaps less than perfect, each struggling to find their own slice of happy, but just as deserving of romance, thrills and chills in their lives.
Recipient of the ReadFREE.ly 2019 Best Book We’ve Read All Year Award for “Covering Ollie, the 2015 RomCon “Reader’s Choice” Award for Best First Book, “Slim To None”, and Finalist for the 2017 Kindle Book Award with “From Dust”, Freya continues to add to her rapidly growing collection of published novels as she spins story after story with an endless supply of bruised and dented characters, vying for attention!