I was smart enough to not make any New Year’s resolutions, let alone that I would be more diligent in posting here.

2021 was an important year for me. For one thing, I completed my 60th TATS (Trip Around The Sun), was diagnosed with Type 2 diabetes, acquired two feline sidekicks, and bought a condo).

In other words, I did a bunch of grown-up stuff (Kittens count as grown up because I’m the one feeding and cleaning up after them).

Yeah, I bought the condo I’ve been living in (but the bank screwed up so mightily that it didn’t close until this year). I have been rootless for nearly 20 years, starting with a 2003 eviction, and never really establishing myself anywhere. I was couch surfing, which is where you go from one “Sure, you can stay for a while” situation to the next. I also lived in fleabag hotels (and this included 4” roaches in the shower in a state where they aren’t “palmetto bugs” and a crack whore pounding on my door screaming “White Bitch”), camped where one night, some local drunk decided his girlfriend was in my tent and sat outside screaming her name and shaking my tent, got thrown out, stolen from, slept in my car a few nights. Let me tell you, when you’ve pitched a tent as a means of housing yourself, camping loses a lot of the “fun” aspect. I also spent time in a homeless shelter where at least two dead bodies were wheeled out in the middle of the night, and the woman in the bunk under me threatened me if I didn’t stop snoring. I think I’ve had enough.

So, now I have a home of my own. It’s nice. I have my own space, and based on the previous paragraph, you may understand if I want to keep it that way (that plus the 60 years old make me less inclined to be understanding of roommate quirks). 2021 was the first time in years that I didn’t draw unemployment and worked only for one employer. 2021 was the year of achieving stability.

And since I had the job from one end of the year to the other, and it came with medical insurance, I actually saw doctors this year. I got poked, prodded, probed (Aliens outsourced the anal probes to gastroenterologists who rebranded them as “colonoscopies” and convinced the government that everyone over a certain age should have one free), lasers shot into my eyes. On March 24, I was diagnosed with Type 2 diabetes, which still pisses me off. I had pills pushed at me (I pushed back), testing supplies that require sticking needles in your fingers multiple times per day (fun if you type for a living), and attempts to put me in a nutrition course that was going to train me to “manage” diabetes. Trouble is, I didn’t want to manage it. I wanted to kill it. I refused the nutrition class and charted a different course through keto (higher healthy fat intake, little to no carbohydrates) and intermittent fasting (I don’t eat before 10 AM or after 6 PM and once a month, I will extend to 48 hours). My blood sugar has been below the 140 threshold for pre-diabetes since April, and A1C went down to 5.6 and has stayed there since April without medication. I make it to April with these kinds of numbers and no medication, I’m considered in total remission. If I make it 5 years, it’s a cure. Now, this is important: what worked for me will not necessarily work for someone else (“Your results may vary”): combination of drastic carbohydrate reduction, intermittent fasting, and spite (Yeah, we’ll see who’s diabetic, goddammit). BTW, if you are also getting pushed into taking statins for high cholesterol, cutting out the carbs may be more beneficial than poisoning your liver. New study out (and the sugar industry paid for the studies that blamed fat in the first place). 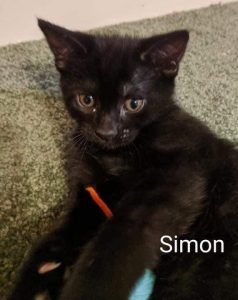 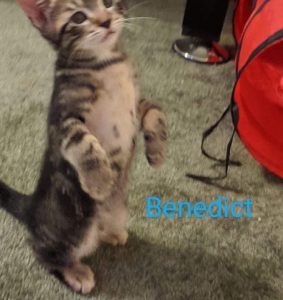 Now know as Elwood and Jake: 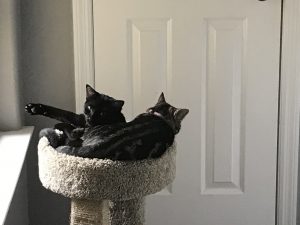 Part of the trauma of the past 20 years was that in 2005, I took my three remaining cats to the animal shelter because I had no food for them, no home for them, and no medicine for George (he was diabetic). It took until June 2021 for me to stabilize enough to bring two more little lives into the picture. As you can see, they were adorable little kittens at 2 months. 7 months later, they push me out of a queen-sized bed. Jake, the tabby, is a thinker and problem solver. He’s not as energetic as Elwood, but whereas Woody will be the first to do something physical, like jump to the top of the kitchen cabinets, Jake will try to figure it out before trying. And then, he does it. They are my Boys and I love them.

Which leaves us with the the age:

I’m still coming to grips with being 60.  It’s not like I didn’t see it coming – you just have to not die for 60 years. The thing is, I realized that I can’t pretend I’m middle-aged anymore. All the health issues that came up this year (and were dealt with) are reminders. You go for so many years having another generation or two (sometimes, three) of your family ahead of you, and then one day, you realize that you are part of the oldest surviving generation. Yeah, I think about things like that. And members of your generation start leaving (some, way ahead of their time). It’s time to start winding down business. And you not only realize that your time is finite, but you don’t know how much of it you actually have. How do you want to spend it? I’m working on a couple of creative projects that maaaybe I’ll tell you about. (I’m superstitious – if I talk about my plans, they don’t happen).

So, here’s to my 61st year in my own home, with a little furry family, and…stable.